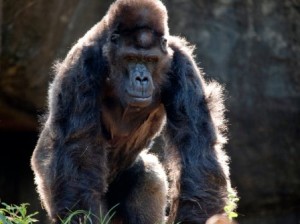 Many of you may not know that I had the pleasure of serving as the Public Relations Director for Zoo Atlanta from 1994 – 1998. It was by far one of the most fun jobs I have ever had. Not only did I have the pleasure of working with an incredibly talented team of people, but I had the opportunity to get to know some amazing animals. One of those animals became near and dear to me while I was there. Sadly, Ivan the gorilla recently passed away at age 50.  He captured the hearts of animal lovers and activists from coast to coast as he moved from a concrete enclosure at the B&I Shopping Mall in Tacoma, Washington to the lush outdoor Ford African Rainforest at Zoo Atlanta. It was one of the most incredible highlights of my career. The day Ivan arrived we had 22 news crews on the ground. It was a mix of media from Seattle and Tacoma, Atlanta and national reporters. His arrival was covered by print, TV and radio, and visitors flocked to see him.

From his first steps into the rainforest, to his introduction to potential mate Molly, Ivan’s wonder and surprise captured the hearts of zoo staff and visitors alike. He taught us how to look at the world with wonder, and that it is good to have a safe place. The research staff and zoo staff that cared for Ivan was incredible. I’m not sure where they are today, but their level of care was amazing — Charles Horton, Kyle Burks, Sam Winslow, Dr. Terry Maple and others come to mind. When the public relations team took reporters to see Ivan, he often got treats to come out to say hi. Because of this, Ivan often came out to see us because he associated us with treats. It was always nice for such a magnificent animal to be happy to see me, even if it was mostly because of the gorilla chow, apples and carrots.

Another fun aspect of the zoo was serving as one of the spokespeople!  Needless to say, my quotes are much tamer since leaving the zoo.  Check this one out for instance. . . .

He’s a frustration to Kuchi, the zoo’s mate of choice for him. She’s known for “sneaking up behind him and poking him in the butt, then running away,” said Carol Flammer, zoo spokeswoman. “She’s a pest.”

Nevertheless, a month ago the zoo gave the two a room of their own, hoping to encourage intimacy.

“Kuchi made him some decent offers,” Flammer said.

You can see the full article form the Seattle Times here.

Ivan, you will be missed. You gave a whole new twist to the phrase gorilla marketing ;).